Confessions of an Annecy Virgin 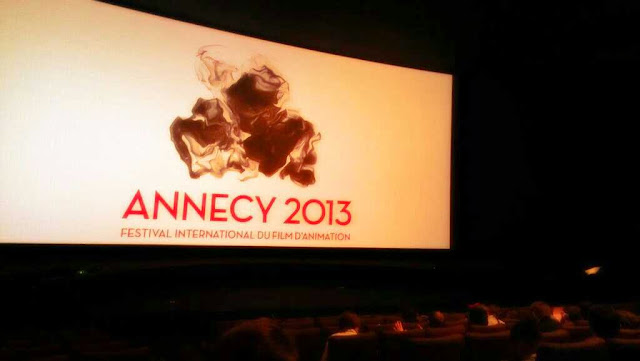 The first time... it is something you will always remember, a special time to be thoughtfully cherished and, when the universe aligns, enjoyed to its fullest in the true spirit of the French mode de vie. I am, of course, talking about Le Festival international du film d'animation d'Annecy, or simply "Annecy", as those in the animation world affectionately call it. 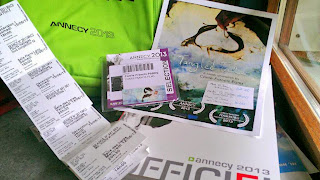 Since my early days as a student, Annecy’s reputation has demanded deference. With each new film, I diligently filled out the entry form and sent in my DVD, wondering if I would ever have the chance to join the historical roll-call of Annecy animators.


This year, the universe did align. A Tangled Tale was one of the 236 films selected from 2461 submissions. And so I joined roughly 7099 other animators and industry professionals in the quintessential French alpine town for a week of animation glory.

I arrived in Annecy directly from the closing night of the Hamburg Kurzfilmfestival, and when I say closing night, we really did shut it down- they were moving on to the hard alcohol when I caught my taxi to the airport at 6am. After a week of explaining sand animation to live-action filmmakers, what a relief for my sleep-deprived mind to find myself in a shuttle to the lake talking about the minutiae of animation theory with animator/professor Raimund Krumme and animation student Sara Shabani (Bike). It was like coming home to my animation family!

I quickly learned that I was not the only newbie at Annecy. There was a new Artistic Director, Marcel Jean. He soon became the charismatic face of the festival, introducing the special screenings, important guests and moderating the morning Q+A with shorts directors.

Also, the famous Bonlieu Theater, which had been the central hub of the festival in years past, was under renovation, which meant the main screenings would take place in a specially constructed theater at the Salle des Haras. This was essentially a giant shipping container plopped in the courtyard of what used to be a convent. Standing outside, one could hear every thunderous Dolby boom shiver through the thin walls. The courtyard unfortunately turned into a giant mud puddle when it rained and the soggy row of portable toilets diluted the Annecy glamour to the level of a hippie music festival. With seating for 800+, this was where all the “important” events took place.

Despite my sleep-deprived state, I was quite eager to see the first Shorts in Competition screening in the Salle des Haras. After picking up my accreditation and tickets (which required waiting in 3 separate lines and talking to 6 people, yet remarkably only took 20 minutes), I met up with Swiss animator Dustin Rees (Ransom) to head into the Salle. After our first 80 minutes in knee-breaking bleacher seats in the main seating section, we learned the best seats in the house were down in the front row, offering high-backed chairs with plenty of legroom in exchange for a mild risk of being hit by paper airplanes. Rees, an Anncey veteran of many years, took me under wing and explained three essential traditions of an Annecy screening:

1) The paper airplanes gliding in flocks from the upper rows of the theaters must be wildly applauded should one manage to even come near the massive stage.
2) The certainty of a rabbit hidden somewhere in the Annecy Teaser, which causes the crowd to go wild once spotted.
3) The distinctive popping fish sound and possibly other animal sounds to be produced during any extended period of darkness.

All these I experienced in every screening, though frankly, I expected the Annecy audience to be much rowdier. There were no shouts or boos or throwing of objects during the screenings. There was always polite and sometimes even enthusiastic applause as soon as the end credits appeared. Every screening I went to was full enough to feel like a crowd, and while the ticket-procurement process was baffling at first, once I figured it out, I never felt like I wouldn’t be able to get into a screening.