Being a resident of a small mountain town, I end up cramming my trips to the city full of art museums and city culture. My recent trip to Washington DC was no different. In a day and a half, I managed to get a glimpse into Julia Child's kitchen, donated to the Smithsonian Museum of American History in 2004 by the delightful 6'2" giant of gourmet accessibility herself along with a new taste for ancient Korean pottery at the Freer, not to mention the overview of Josef Albers' lifetime of color studies on display at the Hirshhorn and the collections of Chester Dale Impressionist to Modernist and contemporary treasures from Robert and Jane Meyerhoff at the National Gallery of Art. 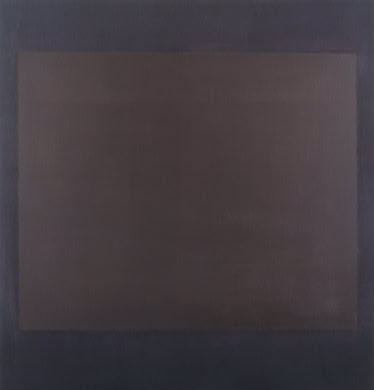 But most remarkable and provoking to me was a corner of the NGA's East Wing (I love the East Wing!) called the Tower. A spiral stair leading up to this single, square room with high skylights diffusing natural light throughout the space is one of my favorite places to find treasures. Currently, hanging on the walls are 9 large paintings by Mark Rothko, commissioned in 1964 for a non-denominational chapel in Houston, TX, a place of contemplation. The paintings are black, and shades of black - a color Rothko felt affinity towards at this late stage of his life for reasons still debated. Being surrounded by ther 6-foot black canvases covered with Rothko's shadowy, enigmatic brushwork in this small space brought on a variety of feelings. The paintings were paired with a recording of music by Morton Feldman a friend of Rothko's who composed Rothko Chapel specifically for the chapel after the artist's death in 1970. The exhibit incited a somber air of contemplation, a momento mori, which, even as it was created, was swallowed by the museum around me; an older couple reading aloud bits of the interpretations, a group of school kids filtering down the stairs, a security guard pacing the perimeter of the room. I felt drawn to sit and let the blackness swallow me from all angles as Feldman's music struggled submerged beneath the museum ambiance like a small child in a pool who has lost his grip on his inflatable raft and flounders after it with his face barely above the surface. I sat there for probably about 3 minutes, wanting to let the tones of blackness come out of the paintings and swallow me into a shadowy world, wanting to put my hands out in that cloud of darkness, take hesitant steps like a blind woman hoping for my hands to come into contact with something solid, wanting a light to pierce the darkness as the choral notes swelled briefly and in that moment catch a glimpse of the dazzling back of God retreating into the cloud. For 3 minutes, these things passed through my mind, along with the steady steps of the security guard, the voices of new visitors ascending the stairs, the train I had to catch to the airport, before I felt and obeyed the urge to move. As I descended the tower, I wondered how much longer I would have stayed had I been in that chapel in Texas, contemplating the things of the Spirit with these dark mysteries surrounding me and the echoes of thousands of other contemplations from all the chapel's past visitors resonating with the suspended notes of Feldman's composition.

More about the exhibit here
Posted by Unknown at 11:45 PM 2 comments:

10 years ago who would have thought that there would even be 10 animated feature produced in 1 year. Roger Ebert's list of the year's 10-best animated films, give you a taste of how the industry had changed. Several of these films showcase animation by independent filmmakers - notably Nina Paley's Sita Sings the Blues and Ari Folman's Waltz with Bashir - defying the public conception of animation as Disney or Pixar - though both studios have made the list!