A response to the Producers' Dilemma

Today's blog post from Animondays got me thinking. David Levy points out that times are a-changin' not only for animators, but for the people at the top - the producers. There are flocks of unemployed producers out there, having been let go from the networks and big studios during economic earthquakes. Now they have to redefine their role in a changing industry.
When I graduated from college in 2001, every animator wanted to be directed by someone else's vision (i.e. Disney, ILM all the big names) Now every college grad (whether in the arts or business) wants to be self-directed. These days, there are independent studios popping up like mushrooms after a rainstorm. Most of them are doing excellent creative work thanks to cheap technology and fast, global communications, but very few realizing their fullest potential through lack of resources. I fall right into that category.
I would LOVE to have a producer for my upcoming short film, or even an agent for the one-of-a-kind freelance animation I produce. But as Levy points out, being a one-woman business with the lowest overhead possible, I can't afford to put one on salary. But then, isn't it part of a producer's job to find the money to fund their own salary? I'm sure a producer can't animate as well as I can, but I bet she would be more efficient at all the other film logistics that I've hacked away at over the years simply because I've had to. I wonder how many more films I could have made if I could have all that time back. I can, and do, determine budgets, contracts, work schedules, festival submissions, deliveries etc. But I don't do all those things as well as I animate and I probably spend at least 50% of my working time taking care of business tasks! If I could double the number of jobs I take and (theoretically) double my income, then it all comes out in the wash as even. Except I would have more work and experience on my demo reel and a producer would have a job. But to actually jump-start that sort of relationship takes an initial investment on the part of both me and the producer.
I hear a lot of talk about introducing business and marketing classes into art curriculum to make our art students more well-rounded. Where I am now in my professional life, I wish I had had some of that training. But I also wonder if trying to make our creative people into business people as well defeats the purpose. There seem to be plenty of creative ideas out there in the cloud, many of them being made regardless of budget and audience limitations. We don't need more animator-producers, with half-baked ideas that never get beyond a few thousand views on Youtube. We need a way for the people with the producing skills to effectively team up with the creative executors so that neither party starves in the process and the world is edified by good art.
Once this economy upturns, will all these free-floating producers get reabsorbed into the big studio system, or has the structure of commercial animation fragmented for good into a self-directed, industry on both counts? If it has, (and I hope it has), then hopefully there will be a natural selection where the visionary, brilliant artists and the savvy, entrepreneurial producers will find themselves the last ones standing in a symbiotic relationship.
Posted by Unknown at 2:00 PM No comments:

This is a great promo video that give you all you need to know about the show in a nutshell. About a minute into the video you'll see me demonstrating the sand animation, which appears at the beginning of the Aladdin sequence. My 17 seconds of fame! Another cool artist who contributed to the project is a paper sculptor, Megan Brain. Read more about my role in the show below.
Posted by Unknown at 2:00 PM No comments:

A World of Color, with a bit of sand animation too! 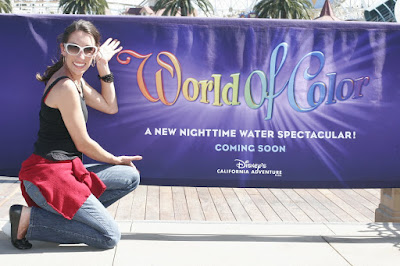 June 11th, a new evening spectacular will premier at Disney's California Adventure Park. World of Color is a light, water and music extravaganza, staged on a pool the size of a football feild. If you have ever seen the Belaggio Fountains of Las Vegas, extrapolate that out 300 times and you might come close to what Disney is aiming for here. The fountains are choreographed to music recorded by the London Philharmonic and animation being projected onto the largest mist screen in the world. That's where I come in. I collaborated with the imagineers to create some sand animation during the Aladdin segment of the 25 minute show. It's a very short segment, so don't blink, but I think the idea of projecting sand animation on a water screen is just sorta neat. 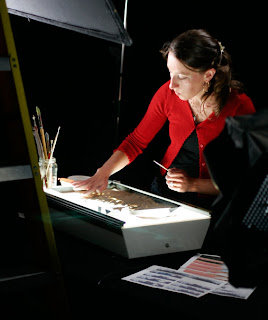 Sand animation is usually done on a light table and comes out black and white, but obviously for the World of Color, brilliant colors were a priority. After a lot of experimentation, I've come up with some new ways to use sand and color. You'll have to go see the show to see the work I did for Disney, but the film which inspired Steve Davidson to give me a call was my sand animation film Tracks. Working on the show was an awesome experience. I had free reign to pour my creativity into taking the timeless orchestral score from "A Whole New World" and create unique images based on one of my favorite Disney films of all time. To find out more about sand animation and see some more examples, read my recent blog entry on Sand Art vs Sand Animation.
Thom and I were lucky enough to get a behind-the-scenes tour a few weeks ago. 30 days before opening night, the crew of engineers, sound gurus, fire and water experts and laser players were working from dusk til dawn. They weren't projecting animation the night we were there, so we didn't get to see the full glory of the world's largest water projection screen (50 x 380ft!), but they ran through the entire fountain show twice with music at full blast. Thom and I are hard to impress, but there were several moments during the show when we both pulled a Keanu Reeves matrix-esque "Woah." LED lights under each fountain bring a full spectrum of choreographed color to the pool. Lasers interacting with the mist create some amazing patterns. Not to mention flame throwers. Only 6 of the 24 were going that night and it was still a hot blast in your face. Talk about a multi-sensory experience!
A few interesting facts we learned:
The best (standing) seat in the house is on the top of the first set of curves steps on the pavillion. You will feel the heat of the flamethrowers and the cool kiss of the mist, but not get drenched by it. And you will be able to see over most of the people standing in front of you.
The platforms, which hold the 1,200 fountains, are designed to float so they can be on the surface for maintenance. They take in water to submerged for the show. the control room is a submerged, water-tight container which is activated remotely from the tech room across the studio backlot.
There's a hot tub in the backlot. This was installed for the scuba engineers who would spend hours submerged in 50 degree water while installing the equipment. They would stay under until their core temp dropped too low and then take a turn in the hot tub before getting back to work.
Since this is a laser show, there were and will be airplane spotters whenever the show is playing. If an airplane looks like it is going to cross over the extended sky space of the show, the technicians knock out a few lasers until it has past. Don't worry, there will be so much else going on, you probably won't notice a few missing ones.
One of the coolest laser effects, during the "Little Mermaid" sequence, actually started out as an accident. The water guys were testing on one side of the pool and the laser guys were doing their thing on the other side and someone happened to look up and notice the eerie wave-like bands of color rolling through the mist. It was so astonishing, they gave it a prime spot in the show.
The fountains can blast up to 200ft. On a windy night that means the water gets blow all the way to the bridge. Raincoats, anyone?
To read a very thorough description of what the show is like, check out the Disneyland Examiner. The best pictures of the development of the show are on the Facebook Fan site for World of Color.
Posted by Unknown at 11:00 AM No comments:

Last season at Cardrona, I made a fun little kid's video based on the books by Amy Sheehan. Check it out!

You can read the story books online and find out more about the fantastic kids programs at Cardrona on their website.
Posted by Unknown at 9:04 AM No comments: