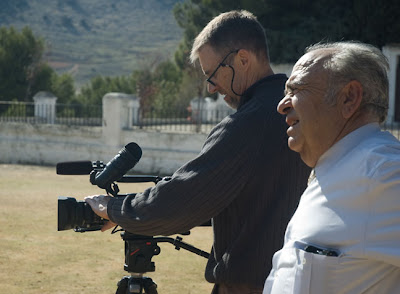 video production crew. Our goal was to gather shots of the towns in the area for the new intro, which I had been one of my tasks here. So we packed up the cameras and after a few false starts due to inclement weather, we finally were on our way Thursday afternoon.

Our first stop was Aguadulce, just a few kms down the highway. We drove through the streets of this tiny town looking for the centro urbano - the cernter of town where there was likely to be some sort of landmark to photograph. Eventually, we found a tiny plaza mayor with an ayunamiénto (town hall) and a pretty fountain. That's it. We asked some locals - no nothing else in town. And they didn't even know why it was called Aguadulce! At least they could have made something up! 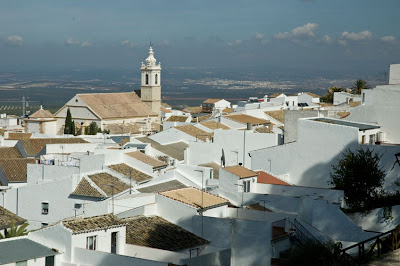 Next stop - Estepa. If I was moving to this area, I would live in Estepa. It is huddled part way up two rocky hills that promise some great sunset views. And below, spread out to the north is a buena vista de campania. There is a crubling torre on a hill with a lovely park, and a nice bustle of people climbing steep, narrow streets. But really, the reason I want to live there is that every year, from October to January, the town is permeated with the sweet, smell of browning sugar and cinnamon. Polvorones y Mantecados are the traditional dulces of Estepa and they are so famous they are shipped all over the world. Several factories are scattered throughout the town and there is a sweets shop on every corner. Don't ask what they put in these crumbly treats. (Really, you don't want to know!) But I tried one in the museo and well... just had to buy a whole bag!

After a lengthy lunch in the upper floor of El Morocho, watching businessmen wheel and deal as we waited and waited for our food, we quickly headed to Herrera. Again, on plaza, and one fountain. Not much else.

El Rubio was a bit more promising, but there was a funeral at the church so we couldn't really stop and take pictures. I tried to find out who this Blonde Guy was that had such a quaint little town named after him, but to no avail. I guess there are lots of blondes roaming around getting things named afer them. 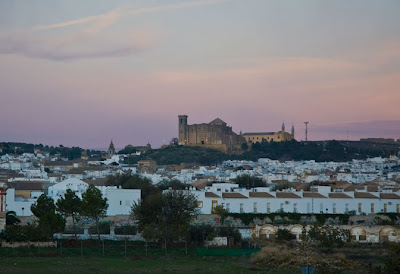 The final stop was La Antiquela, José Maria's hometown. The light was fading fast, so we snapped some pictures and headed back to Osuna just in time to catch the dusk on the cathedral.

It was a long day! But well worth it. The intro is done and with only a few more weeks left, I have many things on my list of hope-to-finish!

Osuna
Posted by Unknown at 1:43 PM No comments: