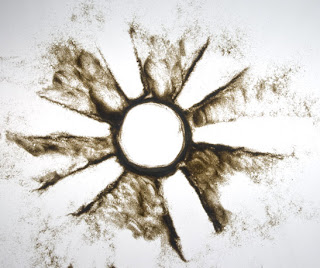 Sand animation has almost become a household word ever since Kseniya Simonova's winning performance hit the million view mark on Youtube. It is a riveting performance, set to epic music, telling a culturally charged story through the progressive live transformation of sand on a light table. I think a great part of the appeal is watching this beautiful, stoic young woman passionately throwing sand on the surface by the handful and making grand sweeping gestures that transform abstract shapes into something remarkably recognizable. We are watching an artist at work, and get a glimpse into the mystery of something we could never conceive of doing ourselves.

But is it sand animation? I suppose if we take the root definition of animation as "breathing life into something" we could argue that Simonova is bringing the sand to some semi-lifelike state of being through her careful movements. There is, certainly some spark of life in a Vermeer painting or a Michelangelo sculpture, so why not a sand painting? But epic music and sweeping gestures aside, when I look at those drawings my first thought is, "Wow, that would be really cool if it started moving!" Animation is the frame-by-frame infusion of life into anything (drawings, clay, objects and, yes, even sand) resulting in something seemingly independent of its creator. Simonova's creations are never detached from her. They are dependent on her presence for their transformative life, whereas a true sand animation can life and act effectively without the audience having any awareness of the animator. So, as an animator, and specifically one who has worked in sand, I take issue with the term animation being applied to Simonova's (and other less famous sand artists') admirable but static performance art.

So, to set the record straight, I offer up a few sand animations which effectively use the medium of sand to create vibrant, memorable films.

Of all sand animators, Caroline Leaf is probably the most well-known. Her 1974 adaptation of the Inuit legend "The Owl Who Married a Goose" might be the definitive black and white sand animation. Leaf's seamless switching between of positive and negative space and fluid transformations emphasize the strengths of sand as an animation medium. 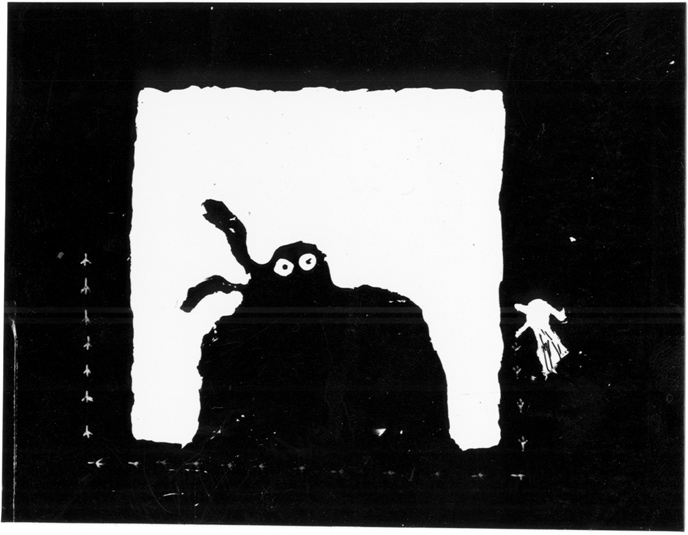 Another classic that you will be hard pressed to find is Bitzbutz by Gil Alkabetz of Israel. Actually, I think he may have used salt instead of sand, but it's the same concept. Good luck trying to get a copy of this one. Thank goodness for youtube, which lets us all enjoy these films! 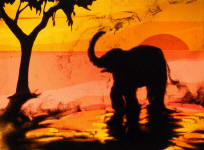 And finally, and most humbly, I offer up Tracks, a sand animation by yours truly. While most sand animation is black and white, I introduced color into the background by using collages made from theater gels which kept the brightness of the pure light behind the silhoueteted sand while adding the vibrancy of color.
Posted by Unknown at 3:39 PM 4 comments:

Postmodern At Bedtime | The New Republic

A post-internet generation of children books are emerging with David Wiesner's The Three Pigs at the forefront. Here children construct their own mental narratives, reading with non-linear participating in co-creation. It creates a surprising mental journey, but has something essential been lost in the process?

Postmodern At Bedtime | The New Republic

What do you think?
Posted by Unknown at 8:23 AM No comments:


More from the sandbox. When I made "Tracks" I was shooting everything on 16mm and there wasn't much room for play. Now I am trying find some new ways to work with sand using modern technology. I want to keep the look of sand animation, but make the process faster and push the potential further with color and compositing.
Posted by Unknown at 6:58 PM No comments:


Possibly the most influential mentor I've had, at least in my formative years as an animator, was David Ehrlich. David is an independent animator, and artist and a creative collaborator who cross-pollinates with scientists, sociologists, mathematicians and pretty much anyone he comes in contact with at Dartmouth College and beyond. I met him my freshman year and he directed me into independent and experimental work over the next four years. This last fall was his final quarter at Dartmouth before he retires into a new era of teaching and creating in China!

I am not the only one who has been influenced, as is evidenced by the overwhelming response of Dartmouth alumni to collaborate on the David Ehrlich Project. Some of David's past students have gone on to work in the film and animation industry. others haven't pick up a drawing pencil since they last pulled an all-nighter to pass his class. Nevertheless, 18 of us put together an exquisite corpse of animation in honor of David. I started off the film with the volcano and the little orange umbrella. The full list of credits can be found here.
Posted by Unknown at 10:55 PM No comments:

Email ThisBlogThis!Share to TwitterShare to FacebookShare to Pinterest
Labels: animation

A new year and a new technique. I've dug out my buckets of sand (straight from my old haunts in Playa del Rey) and are pushing them around on the light table with brushes, feather and fingers. Here are the results of an afternoon in the sandbox.