The Aspen ShortsFest is just around the corner! To support the festival with a little local love, I made them an animated promo. The aim was to encapsulate everything about the festival in 30-second. Not an easy task when you have 83 films from 24 countries, all genres and all ages represented, all presented in the most beautiful place in the world, Aspen, CO! Tell me, do you think we got it all?


Concept, animation and sound design by CFParks.
A few fun facts about the upcoming festival:
Posted by Unknown at 10:27 AM No comments:

Snow at the Aspen ShortsFest 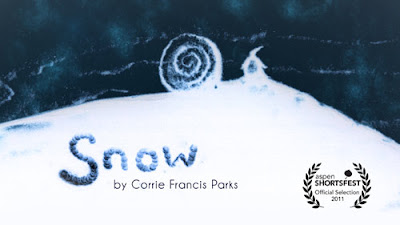 Remember that little sand Christmas card I sent out in December. Well, it's been picked up by a Top 50 film festival in my own backyard, the Aspen ShortsFest! Come watch it on the big screen in the Wheeler Theater in Aspen, CO. Get your tickets people: Friday, April 8, 2011 at 5:30pm
Posted by Unknown at 12:42 PM No comments:

Meditations on a 40 day fast

Today is Ash Wednesday, the beginning of Lent, to which the headaches and indigestion of last night's Fat Tuesday indulgences will attest. As our local parish priest, Bruce McNab commented this past Sunday, Lent is not just a time where you stop drinking hot cocoa. It is a time where we intentionally move closer to God. Lent is a time to give something up, take something on, and draw closer to God through prayer. We remove the things that distract us, add the things that enhance our spiritual growth and our relationships with others, and engage deliberately in the “loving gaze” that is prayer.
I've grown up in the Protestant tradition, with a sporadic practice of giving up things for Lent, always thinking I was trying to identify with Jesus' suffering on the cross by suffering through six weeks without candy and desserts. It only took a few years of adulthood before I recognized the pathetic nature of this approach and Lent eventually became something I didn't really practice. A few years ago, however, I was challenged to give up sweets for Lent, mostly because I had developed a very strong sweet tooth that was giving my dentist a headache. Early in the Lenten season, I was spending a weekend with a Catholic friend. He was very pointedly avoiding the M&Ms and coffee in our conference room on Saturday, but come Sunday, I was shocked to see him munching and drinking away like any old heathen. Upon further questioning, he gently instructed me that Lent is a 40 day fast, (that being a recurring number tied up with Biblical redemption) and that there are actually 52 days between Ash Wednesday and Easter Sunday. Thus each Sunday during the Lenten period was not a fasting day. My friend has a PhD in Molecular Biology but I was still skeptical about the math so I actually went and counted the days on a calendar. Lo and behold, he was right!
Turns out that, outside the Tradition of Ludicrous Self-Denial, Lent is a period of anticipation and celebration! Each Sunday is meant to be a mini-Easter, where we break our fast and look forward to the big celebration on Easter morning. I cannot begin to describe how freeing this was for me. Instead of dragging my feet through the weeks preceding Easter, I would eagerly look forward to Sundays when I could enjoy a small something sweet and think about God's love and the wonderful story of the empty tomb. It turns out that the discipline of fasting should, paradoxically, be a freeing exercise.

As this Lenten season begins, I humbly offer out to the world a film I made many years ago. It is a film about freedom through sacrifice. May the next six weeks bring freedom from whatever has been confining you this year.

I caught some sort of handyman bug last month and the studio became a bonafide construction site! I love the idea of building things, but I have to admit that up until a few weeks ago, I didn't even own a screwdriver. I've been meaning to make myself a larger workspace for the sand animation and while wandering through WalMart I saw this glass computer desk. That was the catalyst. At 40"x 24" it's the perfect size, pretty darn stable and the glass is thick and sturdy. I had originally thought I could use the keyboard tray to slide reference drawings under the glass, but I decided I needed to frost the glass to diffuse the light properly so I ended up taking it off. The $100 was well worth not having to figure out how to build a table and put a huge sheet of glass on top. 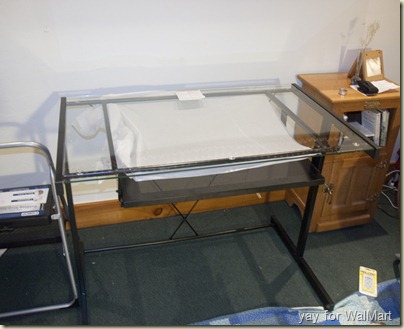 Once I got the table set up, I had to figure out how to get the light below and the camera above, so off to the local hardware store I went with my concept sketch and no idea where to start. The lady at the front counter sent me upstairs to consult with Max (aka MacGyver). He took one look at my sketch and got this twinkle of glee in his eye and off we went on a whirlwind around the hardware store collecting items.

Putting it all together (hooray for power drills!) This is what it finally looked like once it was all attached. I used 2 C-clamps to secure the wooden frame to the table top so I wouldn’t risk knocking it out of alignment. 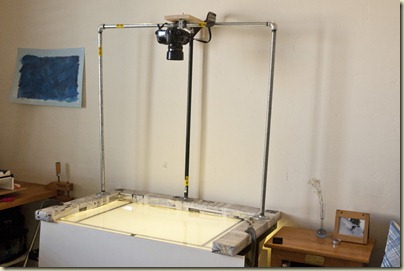 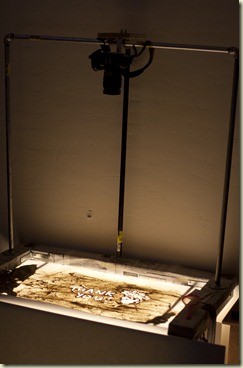 And here it is all lit up and in use! Thanks to Max and Spencer who didn’t roll their eyes every time I walked in the door at Valley Lumber (and it was more than a few visits!) I made sure to bring them a big pile of chocolate ship cookies!

You can expect some new sandy work soon!