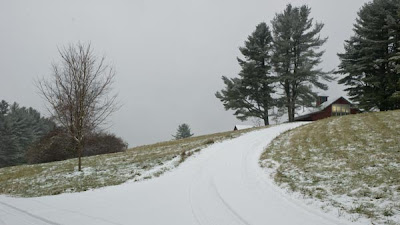 Early this morning I watched the first few whispers of snow fall outside my window. Soon they had multiplied into a soft, misty flow of small flakes that balanced on bare branches and curled up in cups of shriveling brown leaves.

These days the first snow never seems to last. In fact, rain is forecast for the next few days and the muted, monochromatic world will become sticky with mud over Thanksgiving. But for now, perfection holds its breath.

Posted by Unknown at 5:32 PM No comments:

Colony life is enigmatic. I came across a section of Wallace Stevens' poem, Auroras of Autumn, which hints at the effects of colliding creativity in a contained environment. As artists, our mode of thinking resonates together and the more time we spend, the more eccentric we become, tuning ourselves to each other’s energy. Smoke and explosions tread on the heels of quiet contemplation. What will happen to us, when we leave this place? We seemed to exist quite happily before here, so surely we shall be able to do so upon return, but perhaps restructured into slightly different people.

And of each other thought – in the idiom
Of the work, in the idiom of an innocent earth,
Not of the enigma of the guilty dream.

We were as Danes in all day long
And knew each other well, hale-hearted landsmen,
For whom the outlandish was another day

Of the week, queerer than Sunday. We thought alike
An that made brothers of us in a home
In which we fed on being brothers, fed

And fattened as on decorous honeycomb.
This drama that we live – We lay sticky with sleep.
This sense of the activity of fate-

The rendezvous, when she came alone,
By her coming became a freedom of the two,
An isolation which only the two could share.

Shall we be found hanging in the trees next spring?
Of what disaster in this the imminence:
Bare limbs, bare trees and a wind as sharp as salt?

The stars are putting on their glittering belts.
They throw around their shoulders cloaks that flash
Like a great shadow’s last embellishment.

It may come tomorrow in the simplest word,
Almost as part of innocence, almost,
Almost as the tenderest and the truest part.

Posted by Unknown at 9:51 AM No comments:

It’s all downhill from here

“Since time was created, had a beginning and will have an end, it is a creature with whom we can have understandings and misunderstandings.” – Madeline, L’Engle

Time is not an old man with a long beard and sleepy eyes. It is a creature: volatile, temperamental, full of energy, bursting into sprints and then curling up next to the fire and ignoring all attempts to prod it forward. The coming and going of various people in the past few weeks has motivated the time-creature to stretch itself up from the cozy fire and venture outside of a sniff of the late fall air. And now, with only 3 weeks left before I return to real life, Time has suddenly decided to bound forward, dragging me behind. I have so many creative adventures I want to try, people I would like to get to know better that I fear negotiations must begin.

In the meantime, I'm still working.

p.s. See the results of this endeavor.

Posted by Unknown at 5:55 PM No comments:

Ghosts in the Night 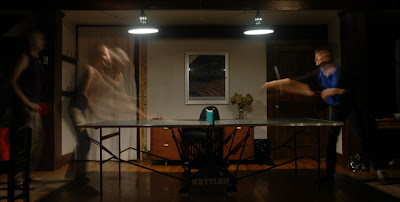 Halloween and the Colony Hall was full of ghostly movement. I was struck with inspiration in the midst of the festivities and did some ghostly photography. The bar was quite active as well as you can see in this little timelapse.
Posted by Unknown at 7:19 PM No comments: