Icing on the Sachertorte - Thoughts on Tricky Women Animation Festival

The Tricky Women International Animation Festival proclaims to be the first and only animation festival dedicated exclusively to women. From March 6-11, 138 films screened at the Hyden Theater in Vienna, Austria. As a friend keenly observed, Vienna is wedding cake of a city – everything is covered in ornate icing, from the mirror on the ceiling of my hotel bathroom to the silk hoods of the carriage horses in the streets.

A small festival with a single venue, Tricky Women has a very cozy feel. There were plenty of international visitors from around Europe (I was the only one who had crossed the proverbial pond). At least two or three filmmakers were present at each program to present their films in person. It was an all-shorts programs, with 38 films in Competition, 7 themed programs and panoramas, two artist presentations and an afternoon of workshops.

The schedule was so packed that I didn't make it to all the screenings – in fact we barely had time to grab a bratwurst from the street vendor in between shows. However, the festival took good care of their international guests, with a fancy lunch at Demel, the most famous bakery in Vienna, a Meet-the-Artists forum, where we were able to talk a bit more about our films, and most importantly, good tips on the local late night hangouts. For me one of the highlights was a walking tour of the city focused on prominent Viennese women through history.

With the exception of the jury members and a few working professionals, the majority of filmmakers in attendance were either just finishing their studies and starting their careers. Many of the films were graduation films and crowdfunding was a hot topic – almost everyone had heard of it, but its implementation  is not so pervasive in Europe for a variety of logistical reasons. Jury member Signe Baumane gave a packed workshop on her Kickstarter-funded feature-in-progress and I had several conversations with filmmakers about my own experiences with A Tangled Tale. While some countries still have a good bit of governmental funding for films, it often goes to the same list of people and the same 'type' of projects, so this new generation of filmmakers is very rightly concerned with how to transition outside the academic environment. There was much talk about how to “make it” and from my unofficial survey, it seems students in Europe, as in the US, are turning to freelance work.


One thing I noticed very quickly was that there were very few 3D computer animated films in the selection – only 3 of the 38 in competition. This got me thinking. Of course no one wants to make broad sweeping generalizations about the sexes, but the absence of 3D animation in a women-focus festival was so noticeable it begs the question, “Why?” Signe Baumane and I theorized about this over breakfast one morning. Her theory was that perhaps in general, women are more tactile and men are more technical – (cue outraged comments from from all the women artists/programmers who DO push computer buttons all day in their creative work). There is also the possibility that the two festival directors have an unspoken preference for works outside the mainstream techniques and this is reflected in their selection. A more far-fetched theory is that this is a reaction to a glut of 3D box-office gambles in the commercial animation industry. But personally, I think it is a bit early to see the trickle-down of the 3D bust appearing in the independent scene.

That said, the jury chose one of the few 3D films for an honorable mention, Out of Nowhere from Isca Mayo and Maayan Tzuriel from Israel. A poetic, subtle story about an ageing lifeguard, and empty pool and a single-minded chicken. The film has some beautiful moments of character animation and some unfortunate modeling mistakes, but the concept is strong and the design carries the film. It just irks me when stray polygons distract me from what otherwise is a beautiful and subtle cinematic moment. What can I say? I’m a sucker for perfection. ~sigh~ 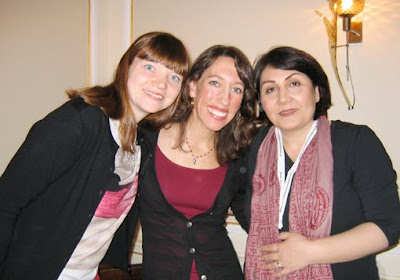 A few other films deserve a mention. One of the loveliest ladies I met was Maryam Kashkoolinia from Iran. A fellow sand animator, her film Tunnel was in the same program as A Tangled Tale – probably a deliberate choice by the programmers to contrast these two types of sand animation. With moments of humor and tragedy, Maryam’s film dealt with the underground tunnels dug to circumvent the blockade on the Gaza strip. At the Meet-the-Artists Forum, Maryam said she chose the traditional method of sand animation not only because it was an appropriate material for depicting digging through a tunnel, but because the black and white nature of the medium conveyed what she felt about life in Iran. “My life is monotone,” she said. The Israelis in the audience spoke up and honestly said the film was hard for them to watch as it only presented one side of the conflict. I thought Maryam's response was both sobering and full of understanding. As an Iranian artist living in Iran, she can only present one side and in fact must look outside her country for her subject matter if she wants to speak to issues of social concern. So while she is making a film about Gaza, she is in fact saying something about Iran as well. Maryam has 2 more films planned for this series – one about buried landmines in Afghanistan, and one about child soldiers in Rwanda.

The grand prize winner was KellerKind by Julia Ocker. While I found the film hard to watch due to its content, it’s about a mother locking her monstrous newborn child in the cellar, the painterly animation and tight storytelling made this one of the more well-rounded films in the festival and I don't begrudge the judges their choice (at least not too much!).

After 4 days of watching films, I've come home with mixed feelings about the overall quality of what I saw. The majority of the films in competition were well-thought out concepts executed with careful attentive animation creating a well-rounded film experience. There were also some films, mostly in the non-competitive programs, in which the quality of the animation took the backseat to concept and design. Particularly, a few of the stop motion films suffered from over-developed scripts (i.e. too long), poorly constructed puppets and hurried animation.

Animation has become “easy” where one can take a pretty drawing, put it in After Effects, set a few keyframes and call it a film. If you have a strong social message, you can get away with even more. In the Meet-the-Artists forum, one young lady readily admitted that she animated the way she did because she was “lazy” - her words not mine! Are we now at a stage where technology had made it possible for the lazy artists to join the ranks of the careful and meticulous crafters based on concept alone?

The Austrian panorama was the most egregious offender in the case of conceptual overload. In talking with one of the festival staff, I learned that there are no major universities in Austria teaching animation. Most students making animation are doing so as part of a fine arts coursework, without the benefit of professionally trained animators. When the Tricky Women Festival gets inquiries from young women about where to study animation, more often than not they refer them to programs elsewhere in the EU. This was unfortunately evident in the Austrian panorama, which was comprised mostly of student work. While some films had good conceptual development nearly all lacked the care and attention to craft which was evident on most of the other films. Only Achill by Gudrun Krebitz, had the production quality of a professional film, probably why she won the prize for Best Austrian animation. Ironically, the film was made at a university in Germany, which just proved the point. So are there any professional women animators in Austria? There were 2 films in competition from Austria: Transition 89, an abstract film by artist/programmer LIA and Edith Stauber's Nachbehandlung (After-Treatment), which received an honorable mention from the jury. The sound design and quirky line drawings carried the film. In this case, the limited animation added to the black hole of time one encounters in a hospital waiting room.

I will readily admit that, at present, I lack the wider context to make any judgments on the state of independent animation. I know there is a lot of top notch work buzzing around on the internet, but this is the first festival I've been to since Ottawa 2011, where I made some of the same observations to a lesser degree. Now that I have the opportunity to visit more festivals with A Tangled Tale, I will be interested to see if some of these trends are actually trending or if they are unique to my experience at Tricky Women. Until then, as the Austrians say, “Film ab!”

P.S. If you want to read more about specific films in the festival, I suggest heading over to Signe Baumane's blog for a look at 16 Films from Tricky Women!