Reflections on a Kickstarter adventure

When I first started playing around with sand animation this year, and found an underwater romance rising to the surface, I had no idea that it would lead to a major crowdfunding campaign on Kickstarter. As the film developed, I knew I wanted it to be more than a low-budget studio exercise. It would be my first professional film and potentially a groundbreaking addition to the sand animation cannon. I knew it needed a finishing fund worthy of these goals. But I also knew I would never be able to convince one production company to give me even half the amount I needed to meet my budget. Sure, I could have cut corners, begged friends of friends for favors, cracked open my piggy back and prayed no rainy days would come. That’s how independent films are made, right? Call me an idealist, but I believe in a better world where artists pay their rent on time because someone pays them a living wage.

Fast forward a few months, 149 wonderful people and 11,811 of their dollars later. “A Tangled Tale” is now swimming in a comfortable budget and my piggy bank is safe. I've had a couple filmmakers contact me already, saying my success has encouraged them to consider Kickstarter for their upcoming films. So, I thought I would share a few observations in hopes of fueling that flame.

Preparing for a crowdfunding campaign is a big deal! More than half of all Kickstarter projects fail to hit their goal (and consequently don't get any money) so I really had no idea how this would turn out. Basically you are pitching your project to the internet. You have to take into account short attention spans and trigger-happy ‘like” button clicking. I think the idea behind backing these creative projects is that people want to become a part of something outside themselves. If you can engage a viewer long enough to show them their role in your creative process, chances are they will be willing to part with some of their hard-earned cash. There are a ton of resources on the web for putting together a good pitch (start with Nathaniel Hansen’s Ultimate Crowdfunding To-Do List). I looked at a lot of other Kickstarter projects, both successful and unsuccessful, read several articles, talked to one person I knew who had successfully crowdfunded her film and pretty much took all their advice.

A a short and efficient pitch video is essential.

The trickiest part for me was deciding how much to go for. With Kickstarter’s all-or-nothing model, you don’t want to aim too high and not reach your goal because then you end up with nothing. However, once you hit your goal, the momentum of the campaign declines a lot (less guilt on the part of the people who haven’t ponied up yet) so setting the goal too low may mean you end up with a bare-bones budget. Some projects do exceed their goals by astronomical figures, but they are rarely films. Music albums, gadgets and games can to go into the thousand percentiles because they are basically discounted pre-sales for a potentially awesome product and usually very affordable (Kickstarter is a fun place to go Christmas shopping). Films on the other hand, don’t have much to offer other than a DVD, so getting creative with the rewards is important!

Here’s how I determined my funding goal: I started with my ideal budget for the film which was $13,000. This included a large contingency for sound design, an expanded marketing and printing budget, and some allocation for film festival travel. I figured from my personal sphere of influence I could get around 100 backers. Kickstarter states their average pledge is $70, so obviously that didn’t match up. I re-crunched the numbers, cutting out non-essentials, assuming I could get a few good deals, factored in the cost of rewards and fees and came up with a workable budget of $8000. It would be tight, but I could finish the film and get it on the festival circuit and figure things out from there. It would need more backers or a higher average pledge to make it, but if Kickstarter worked the way it’s supposed to, there would be backers outside my immediate circle to make up the difference.

Managing the project was another big adventure. Like many artists, I’m not much of a self-promoter, so I had to find ways to keep sharing the project over and over without losing my authenticity. I also wanted to share something meaningful with my potential backers. This meant creating new content by writing project updates, offering special rewards at landmark moments, making some new rewards when the funding flat-lined. 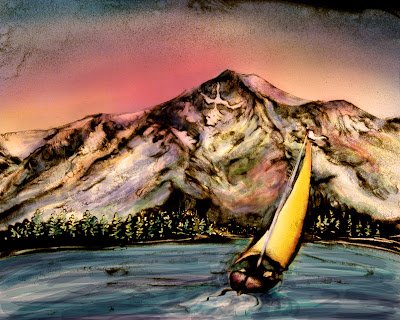 I had 450 people on my email list, and after every email, I saw a jump in the pledges. I asked people to share the project with 2 of their friends in a personal email or phone call. 35% of my backers are people i don’t know, but I’m pretty sure many are a result of those emails and phone calls. Many of my backers have known me for years and probably would have pledged whether or not they got anything in return. Still, most people will pause before they hand out $100, but if they know they will get 2 DVDs and something to hang on their wall for it, suddenly it’s a bargain for doing something they want to do anyway.

We hit our $8,000 goal with 3 weeks left in the campaign and sure enough the pledges flat-lined. Even offering new rewards and email reminders didn’t seem to have an effect. But things ramped up again with a week to go. Some people (including me) work better with a looming deadline and in the last 24 hours we added over $1000 to the budget. Of course there were a few people emailing me after the project closed lamenting how they had missed the deadline. I told them to just send me a check!

I've been AMAZED at the groundswell of support for this film and am so grateful. The best part is that all the money will be cycled back into the economy to musicians, sound designers, environmentally-friendly printers - all small-scale operations that need the work. I hate asking artists to work for free, for the "love of a project". I get asked that a lot and I have a hard time saying "No" when I need to, so the ability to pay people for their work makes me SO happy!

And the best of the best part is that now that I have 149 people supporting me with their hard-earned money, I had better make a damned good film, and follow through on the rewards I promised! There is no financial accountability within the Kickstarter model. I could easily take that $11,811, buy a first class ticket to South America and spend the rest of the year on the beach. But accountability is more than just expecting a return on an investment. It’s a relationship. I think it's a testament to the nature of crowdfunding that more than half of my backers gave less than $50. It doesn't matter if they gave $1 or $1000, they all wanted to be involved in “A Tangled Tale” and that is what motivates me to make sure this is an incredible film. So thanks, Kickstarter, for making the world a better place, one project at a time!

If you missed the kickstarter boat, you can still support the film via PayPal. Find out more at www.ATangledTaleFilm.com

Thank you for this nice write-up, it's great to see some of what went into your successful KS project. I'm also one of your backers, so it's especially gratifying to see you succeed beyond your initial goal.

Speaking only for myself, I fund many projects with small amounts - it's what I can reasonably afford in my budget - because there is a felt difference in spending $10 or $15 or $20 to directly and immediately help a creative person achieve a goal and create a meaningful cultural artifact (book, short-story, film, game, etc.) then there is in throwing $20 at a theater and know that through a long chain of financiers and corporations, the artists and actors will receive some small portion.

Nine times out of ten, the only 'reward' I want is a copy of the finished product. The other rewards are fun, but I like "voting with my checkbook" for the kind of stuff I like. As far as I'm concerned, even with it's limitations, crowd funding is one of the greatest innovations to independently produced creative products and projects to come along in my lifetime. And I'm pretty happy about that.

You're absolutely right. I think most of the people who regularly haunt KS just want to be a patron of things they believe in, voting with their checkbooks, as you say. It's a site that facilitates a greater involvement in the arts and technology, when those things are getting cut out of school and government programs. Thanks so much for 'voting' for my film!

Thanks for taking some of the mystery out of the Kickstarter process Corrie. It was fun to get all the updates and celebrate with you when you met your goal. I even had one of my students remind me that the clock was running out.

I'm a few months out from trying to raise funds for my Br. Thoma project, but I now have a much clearer idea of what I'm getting into. Looking forward to the Tangled updates.

Thank you for this, you've inspired me to give crowd funding another shot. To be honest I get hung up on work deadlines and find myself not having time to campaign.

Hi, I've come across this blog on Cartoonbrew.

I'm planning to go to art school end of this year by crowdfunding myself and I need your advice on providing rewards.

Considering my amateurish level in my art, what kind of reward should I offer?
I can only think of giving away caricatures of my pledgers etc.

Btw, I'm planning to use alternatives to Kickstarter, but I'm reading your blog as advice.

@altercator I don't think the timeframe of rewards will be a problem for you. I'm sure your backers will understand that they have to wait for you to create art before they can own the art, and they will see the value in having art from after you have had the benefit of art school rather than now, when you have no formal training. Usually people give money because they believe in you, not because they want the "stuff".